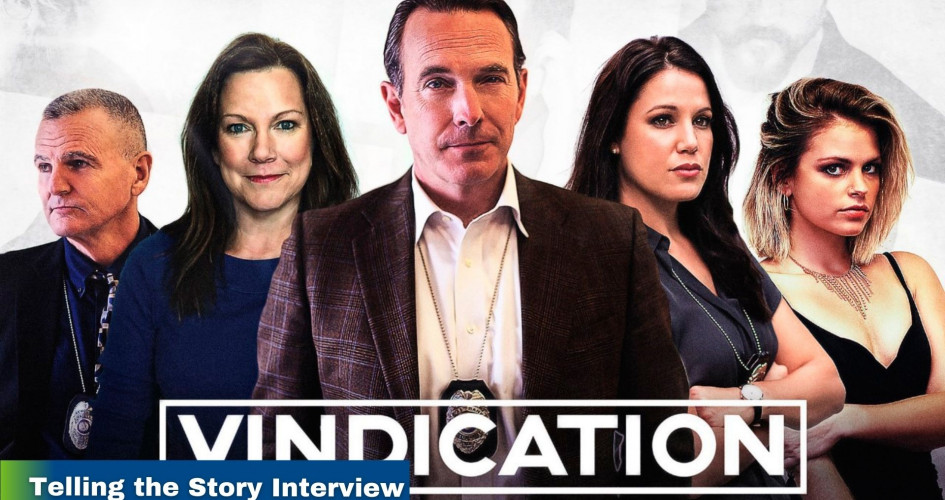 Watch the interview with our host, Bill Carroll, and Vindication's Jarod O'Flaherty or read it below!

Bill: My special guest today is Jarod O'Flaherty, the producer and director of Vindication the series. Jarod, welcome to telling the story.

Jarod: Hey thanks, Bill. Glad to be here and have this opportunity to talk about Vindication.

B: For those who don't know what Vindication is…and I guess there is still a few people out there like that…describe what the series is, what it's about and just basically the premise of the story.

Each episode deals with a different type of crime that our lead character, Detective Travis, that he investigates. Throughout the course of these investigations, God begins revealing himself to the detective and we also learn about the detective's family, some of his co-workers, and the bigger world around him.

J: So, Vindication is a crime drama series. I like to call it a faith conscious crime drama series, as opposed to maybe faith based which is a more common term. It's a faith conscious crime drama series that is episodic. Each episode deals with a different type of crime that our lead character, Detective Travis, that he investigates. Throughout the course of these investigations, God begins revealing himself to the detective and we also learn about the detective's family, some of his co-workers, and the bigger world around him. So, it's not just about solving a crime each week, that's a part of it, but there's a bigger story that grows and grows as each episode goes on. Season one has been released since 2019 and we are now in the middle of production on season two.

B: Great. You started to hint towards this a little bit, mentioning that it's a faith conscious series, so you know there's lots of crime dramas on television and streaming. What sets Vindication apart as crime dramas go?

J: Yeah, I'll give you two things that I think set apart Vindication in the crime drama genre. One, most of the crime dramas that are out there, and there's you know many, many of them at any given time and have been for 20 years, it's a popular type of storytelling format, but most all of them that I've ever seen are either based in Los Angeles, they're in Chicago, they're New York, maybe New Orleans, it's always these big cities that have a whole lot happening. But for the majority of America, that's not what our cities look like. America is made up of small towns, so Vindication is a crime drama series that takes place in a small town. It's different types of cases. It is also a different demographic. They're not walking through these high-rise buildings, police departments with glass windows everywhere with a floor of a hundred people, it's more small town. I think that's something that we haven't seen before and a lot of people can relate to. So that's one difference and then we did touch on it being a faith conscious series, that each episode we don't go in and say, hey what's the most gruesome crime or what's the most evil criminal that we can show and go chase down or who's the worst bad guy we can go find. Instead it's more about what's going on in these people's lives, whether it be in the law enforcement side or on the side of victims or even you know, the criminals. What is going on in their life, what is happening in their life and how do matters of faith and spirituality relate to those happenings.

B: There's a lot of fans of the show who have seen season one so for those fans, where are you now in producing season two? Tell those fans just a little bit of what they can expect in season two, without giving anything away!

“these characters, their stories, how do they continue? What's the next step? What's happening next for them? What are the new challenges that they face?” So, I can say for audiences and for fans that enjoy the characters and their story lines, they're going to learn a whole lot more about them in season two.

J: Well after season one was released the feedback that we got from a lot of audiences was that they enjoyed the crime of the week and the investigations, but it was the characters and their ongoing story lines, their histories, those sort of things, that drew them in the most and that's what they wanted to see more of. So, going into a second season we didn't say, “all right let's come up with 10 more crimes that we can go solve and get rid of.” Instead it was, “these characters, their stories, how do they continue? What's the next step? What's happening next for them? What are the new challenges that they face?” So, I can say for audiences and for fans that enjoy the characters and their story lines, they're going to learn a whole lot more about them in season two. It's not going to be that these characters fade away and the crimes take center stage. You're going to learn more about the characters and they're going to be up front.

B: I don't know how much you want to give away, but are all the main characters from season one coming back?

J: All of the poster characters we'll call them, the people that you see in the headlines, they all do make appearances in season two in some capacity yeah and there’s a lot of twists and changes from season one to season two.

B: And again, you don't want to give anything away, but can you touch on a little bit of one or two of those changes and what some of the characters have to deal with?

J: Well at the end of season one, obviously a few of the characters Chris, detective Travis, took some big steps forward in their personal lives and their careers. Same for Katie Travis as well, so when we pick up season two it's not going to be that they've taken baby steps, they've taken big steps forward. We are going to pick up probably a year and a half, maybe two years after season one ended. It's not going to be just a slow-moving ship as we just kind of creep forward. It's going to take a big step and then by the end of season two, it's going to be even more forward where big things happen. I think you have to do that to keep a series interesting so you're not going to come into season two and feel like you're re-watching season one all over with just some new ideas. It's going to be fresh and the characters will have some movement.

B: I know that everybody involved in the show is praying for it and praying as the shoots are happening and you've mentioned to me and others some just remarkable stories of how God has provided you know for the shoots, whether it be for locations or things that seem to be falling apart at the last minute and God comes to the rescue. Can you tell us maybe one or two of those stories?

J: Yeah, you know I make a list of these because they're so easy to forget. It's funny how that happens, something goes wrong you can remember it forever but when something goes right if you don't write it down, you can forget about it. We have got a lot [of those stories] some big, some small. One does come to mind off the top, since you mentioned it about locations. Early in the season, there was a location that we needed that is kind of difficult to get access to. You know some are easier, some are harder. Finding someone's home is not too hard, getting into a hospital to film can be difficult, especially during Covid times, so think of something along the hospital line, very difficult location to get into. We were running up to just a week or so before the shoot where we didn't know if we were going to have this location and we were looking at backup options. I had reached out to a local city government and of course they were completely shut down at the time for Covid. They weren't letting anyone into their facilities and it kind of went up the ladder to where I think the city manager had to give approval on this. One of the ladies there, who was I guess his secretary, I was calling almost every day of the week, “Hey, you got an update?” “Got an update?” Well I was telling her about the series one day and she went home and watched it. She said the next day she came in, she trapped the city manager in his office and said, “Hey you've got to do this. You've got to let them shoot at this location” and sure enough, later that day we get the signed form granting us permission to go in and shoot. It was actually a facility that during the shutdown they decided they were going to demolish it and rebuild something new, so we were probably one of the last things to ever happen in this building that had been around for 20 or 30 years. The timing of it, the fact that she watched, without her I don't think we would have ever gotten in. And a neat tidbit, while I’m on set shooting there, someone comes up to me from the crew, “Hey Jarod, somebody's here to see you.” Usually that's not a good thing when you're on a film set. So this lady comes walking in, you know real done up, looked very nice. I thought she was like the mayor or is this a city council member, are they here to chew me out about what are we doing with all these people in a building. Well no…it was the lady who was the secretary and she had just stopped by to see the film shoot that was going on! And we were like hey why don't we have you throw on a costume and you can get in this scene to be an extra. So, she ended up being an extra in the scene that we were shooting there as well. So again, it's neat how God brings that together and that was something we were all praying about how we are going to find this location, how's it going to happen and eventually it did.

B: And when do you project that we'll be able to see season two?

J: I can say 2021. It'll be out in 2021. It's going to happen; it will be out this year! Now whether that's a couple of months from now or whether that's towards the end of the year, I don't know that. That's what I say “beyond my pay grade” or “out of my hands”, I don't know that part of it, but I'm working and we're working actively to get it done and ready in a short time as opposed to you know this being something that's going to linger for a long time.

B: People can see season one of Vindication on Redeem TV now and any time. Season two, as we just heard, is coming this year. So, Vindication is coming! Thank you so much.

J: That needs to be on a t-shirt, right? …Vindication is coming!

B: Yeah absolutely, yeah. So you [listeners] have got an assignment. You've got a couple of months at least to binge season one and get to know the stories and the characters. You'll be hankering for season two by the end of that. Jarod O'Flaherty, the director and producer of Vindication, thank you so much for joining us!