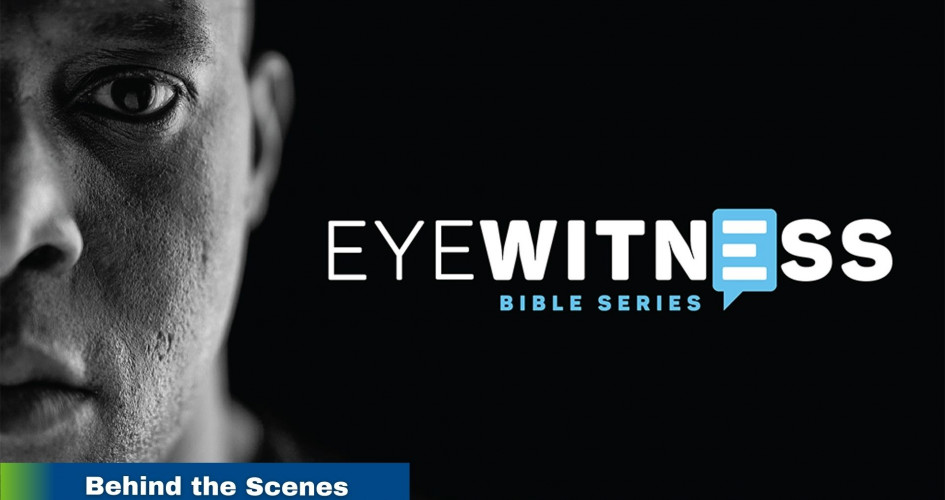 The Eyewitness Bible Series: Behind the Scenes

Background check! Take a look at the background and making of RedeemTV's new Eyewitness Bible Series. We sat down with Phil Smith, the creator of Eyewitness Bible, to ask some questions and find some answers.

The Eyewitness Bible is a series of 150 short videos broken into 10 series that are designed to help you relate to and understand the Bible and Biblical characters better.

Beginnings in a Sunday School Class

Phil regularly teaches Sunday school at his church, working mostly with adults ages forty through sixty. One time he came to recognize that many people no longer read and comprehend as well as they had in past years; as he tracked it down, he realized the reason was that people have lost the ability to read as well as they did before. Instead, the popular method of learning seems to come through watching videos. And yet, there is something about watching video after video that hinders one’s ability to learn as well.

This sparked the idea for Eyewitness. What if, instead of teaching the Bible verse by verse (the way most of his students had been taught the Bible growing up), he told Scripture by story, from the perspectives of its people?

The current book they were working through in Sunday school was Acts, so Phil started with that. He wrote for the class what would later turn out to be the script for the Acts series. His students, about fifteen in total, read the script in class and even wore makeshift costumes.

It went very well. In the following weeks, more scripts were written, more stories in the book of Acts were brought to the classroom, and the enactments were even videoed.

So how did the classroom acting turn into a television series?

Multiple things happened. One actor, who played Stephen in front of the class, had taken acting classes and was an obvious talent. Upon seeing him act, Phil realized this was really good and could be something special.

A friend of Phil’s watched one of their videos and suggested they record it professionally. Well, that was a great idea, but what did it mean?

By God’s direction, Phil met with some locals who were able to pull it together. Robert and Andrea Jobe, owners of Pivot Films, saw the scripts and agreed to see what the project might become. Halfway through the Acts series, it became apparent that they should do much more than just that book—so they committed to the whole Bible! They mapped out around 140 videos in total, tracing the story of the Bible.

While Phil worked as a petroleum engineer before retiring, he has always had an interest in history and geography and is well-versed in Greek and Roman history. He has a large interest in international trade, which actually plays a large part in the story of the Bible. Many are surprised to discover this, but they often don’t see it because they don’t recognize it. Because of his understanding of these other subjects, Phil has always tried to position the Bible stories in their appropriate contexts.

The writing process for each series is involved. It takes three days to write a script for one episode, so about two to three months for an entire series. It takes another month to edit, which involves Phil and Andrea Jobe editing the scripts with much back and forth until they reach the final, polished versions. It takes another month to prepare to shoot and then do the actual shoot, and about three months to edit the video. Most of this process is done in parallel so that several series can be worked on at once. For instance, while the filming is being done for one series, Phil is working on writing the next series, so there is much overlap.

While not all writing is smooth sailing, at times, Phil will be woken up at three in the morning with an idea for a character and the script. Immediately, he’ll go and write it, and the ideas pour from him. He doesn’t see this as coincidental.

It is obvious to Phil that the Lord is guiding his writing. He shares a story of when he was supposed to be writing Genesis—but he just couldn’t. He would sit down to write but was completely unable to type the keys. Then, he read a book by pastor and author Andy Stanley, in which he talked about the first ten chapters of Genesis and how often people, when reading them, argue about the unimportant things and rarely get around to talking about Jesus. After reading that book, Phil—conscious of Stanley’s message—wrote the scripts for the first ten chapters of Genesis in a way that wouldn’t get people distracted. He decided to have Paul narrate Genesis, telling what’s there with almost zero interpretation. After all, the point of the first Old Testament book is Jesus, and Phil didn’t want the series’ viewers getting hung up on the unimportant issues while ignoring Christ’s presence throughout the book.

As far as the content of each episode, Phil tries to stay middle-of-the-road on what’s in the Bible without interpreting it. The people on the production team are from different churches across various denominations. His goal is to help everyone be accepting of it and not find it controversial, no matter their backgrounds and interpretations; and without fail, they always agree with what he’s writing. One way he tries to be careful is by being conscious of where the controversial parts are. For example, instead of digging into these verses in the episode, he’ll have the actors say something like “Spend some time in these verses…” to encourage further study without offering what might be a controversial viewpoint.

Robert and Andrea Jobe are responsible for choosing the final actors. They work with different casting companies to do so, primarily around Oklahoma and Texas. Instead of going in with a clear idea of what they want, they remain completely open to whatever talent comes to them. For each part, up to five people memorize a page of script and then audition through videos, which are then sent to the Jobes, who go through them and narrow down to the actor they want. Interestingly, many of the actors in the cast are not Christians, but now that they’re in the project, many find it interesting and are actually willing for the first time to read the Bible.
Over a third of the actors, almost forty percent, are of a minority. This came as a shock to many viewers, as these actors didn’t fit their idea of what a Bible character should look like. But it works well, as people very quickly quit paying attention to what the actors look like, what they’re wearing, and how they sound, and pay attention instead to the story and the emotion.

Even in casting characters, the Lord’s provision is clear. For example, the man who was supposed to play Paul in the Acts series dropped out two days before they were set to record. The actor who took his place was only given two days to memorize; now, he is one of the most used actors in the whole Eyewitness series.

Another actor, Todd Terry, plays King Solomon in the Kings & Prophets series. He is also the lead actor in the Vindication series, which is available for streaming on RedeemTV.com.

It’s hard to believe this isn’t Holy Spirit led. For some reason which Phil can’t even remember, they decided to film all of the Old Testament episodes at the same time, and they finished filming just before everything shut down in March 2020. They were able to spend the next six to ten months editing it all. If they hadn’t done all of the filming at the same time, they would have been stuck in the middle of it. It’s no coincidence, Phil says, that the Holy Spirit took them totally out of their routine to make them do it this way.

The last thing they filmed before the lockdown was the primary film for the Easter series. They did this specifically because his pastor wanted to have the video to use in his ministry. This, too, was providential—Easter 2020 was in the beginning of lockdown when churches were still trying to figure out how to broadcast to their congregations and often didn’t have the right material to do so. The Easter film, then, came just in time; it was the only video at the time that was entertainment teaching, and it was used for many churches in their Easter services, with one million views total. This film got Eyewitness the most exposure and helped them take off, paving the way for their future series’ releases.

Many decisions about the series have come as a surprise to viewers. For example, why have King Solomon address the book of James? Why have Theophilus as a main character? Why include the tenth leper, or the midwife who delivered Moses? One of the appeals of the series is that they include a lot of lesser-mentioned characters we don’t normally think about when reading Scripture, which makes it more interesting to learn about them.

The videos can be used for individual enrichment or community growth. If used in classes, students can view the videos before class, preparing them so they can learn even faster and easier in class. The study guides are written in such a way that anyone can pick a video and accompanying guide without any preparation and use them to teach a class. Each episode is designed to be about 12-20 minutes long, based on the fact that people learn differently in today’s age and tend to have short attention spans; however, the lengths vary significantly, as each episode is, in Phil’s words, “as long as it needs to be, however long it takes to tell the story.”

The story is of God’s glory, told by Scripture through the eyes of its witnesses.