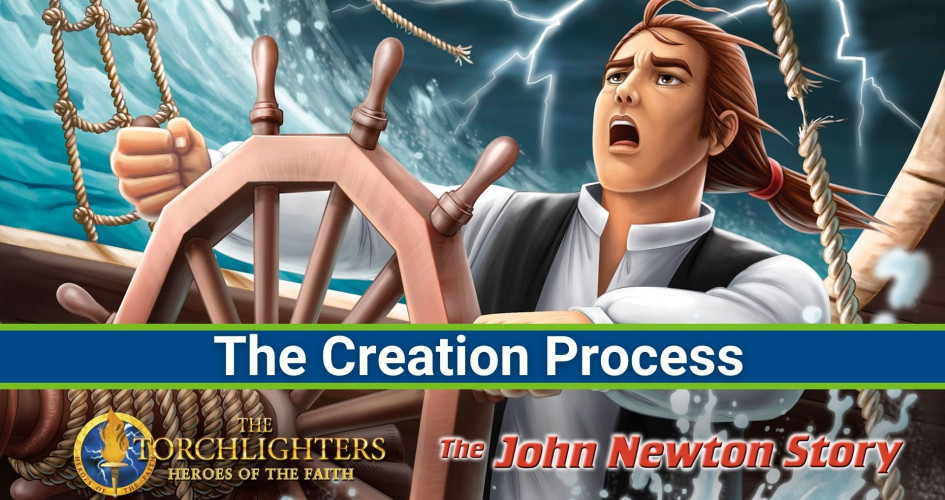 What does the Torchlighters creation process look like, behind-the-scenes? How do we go from a broad idea of a hero to the 30-minute detailed, action-filled films you watch? Read on to find out!

Choosing Newton as the Next Torchlighter

The Torchlighters team, from Christian History Institute, keeps a running list of potential Torchlighter heroes, collected over years of personal reading and suggestions from fans. Occasionally, we have conversations as a team about which names are rising to the top. We try to mix things up so that we do not tell multiple similar stories in a row. Newton is well-known for “Amazing Grace,” which was a great musical tie-in for both the script and the study-guide. On the heels of the lesser-known (but equally incredible) Mary Slessor, Newton is more familiar. And of course, he has a great story!

The whole writing and production process requires a lot of collaboration, with back and forth feedback, as we try to tell the story in the most compelling way possible.

Deciding to tell Newton’s story was the first step. The next step was deciding how to tell it. We carefully considered the best way to handle his story, as it presented particular challenges to the team. Two major questions stuck out: first, how best to portray his controversial conversion story. Second, how best to include the plight of the enslaved African people.

First, Newton’s life is somewhat controversial due to the slow transforming work of the Holy Spirit over a long period of time. He had two major “conversions.” While his first conversion happened in 1748, he continued working in the slave trade for six more years. Some say this is hypocrisy, but we wanted to put emphasis on this as the middle and not the end of his story. We decided to show both conversions while centering the episode on the second, so we portray the older Newton summarizing his younger years and first conversion to a member of parliament. This experience is what we more typically think of as a salvation story: Newton cried out to God in trouble and accepted his need for Jesus to save him. Much later, Newton was convicted of the evil he had done as a slave trader and testified to the horrors of the slave trade in which he had participated firsthand. This is seen as his second conversion, or what some might call a milestone in sanctification, and this is the focus of the film as the catalyst for his work in abolitionism.

Second, we wanted to include some connection to the African people impacted by Newton’s varied work and life, as he himself was first a slave, then a slave trader, and then an abolitionist. It didn’t seem right to tell the story of an abolitionist without telling part of the story of what enslaved African people experienced. We did not want just broad, generalized ideas but rather, a specific story.

Robert, the scriptwriter, came up with the idea for including a fictionalized, captured African family throughout the tale. This would personalize and particularize the big ideas of slave trading and abolition. They show up at the beginning, at the end, and all throughout the episode to dramatize the real human consequences of the vote for abolition in England’s parliament, which this episode centers around.

The first step in the production process is the script. Our scriptwriter, Robert, does an incredible amount of reading and study about our Hero of the Faith before coming up with a plan, in which he proposes a basic outline for how to tell the story. Together, we decide on the final structure.

Then Robert writes the script. The Christian History Institute team reads it and engages in a few rounds of back and forth conversation, editing the script into its final form. Robert also sends a line up of the characters. We aim to be historically consistent and factually accurate, but also completely practical: if two people are wearing a blue coat, they may get confused; can we put one of them in purple?

Next Robert’s team produces an animatic, which includes the voice actors performing the script accompanied by rough drawings of the visuals. At the animatic stage the team can get an understanding of what the episode will look like and can make tweaks to the visuals that might better convey the characters or emotion told in the story.

After we have a conversation about the animatic, the animation team finishes the animation and we get to see a “rough cut” with the whole animation and the voice acting before the music is finalized. The Christian History Institute team watches for any glitches (like proofreading for film) and then Robert’s team finalizes everything for streaming on RedeemTV and for DVD copies.

Throughout the process, we seek to tell each hero’s story faithfully, accurately, and honestly. Of course, we could not make a film on John Newton without including the hymn he is famous for. That is why we chose to close out the episode with “Amazing Grace.” Not only does this remind viewers that this is the man behind the hymn, but the words are also perfectly fitting for Newton’s story. He once was lost in sin but is now alive to Christ’s grace; he once was blind to the horrible things he did (including participating in the slave trade) but, by Christ’s mercy, his eyes were increasingly open. It was not his works that saved him, but the amazing grace of Christ.

Newton’s story is inspiring, impactful, and a great reminder of God’s grace for sinners. Consider sharing it with your children.  You can find accompanying activity pages and more at Torchlighters.org.